After the conclusion of the International Military Tribunal at Nuremberg, the trials known as the Subsequent Nuremberg Trials started. The purpose of these trials was to determine the guilt of second-tier Nazis accused of those crimes and contributed to crimes against humanity.

On May 10, 1947 started in Nuremberg the Case VII, the “List Trial” (official title: USA versus Wilhelm List et. Al.”), widely known as the “Hostage Trial”. The defendants were 11 out of 12 Generals, accused of war crimes in the Balkans. (defendant Franz Böhme committed suicide on May 29, 1947).

The trial lasted 117 days and the sentences imposed by the Nuremberg Court on February 19, 1947, were the following: 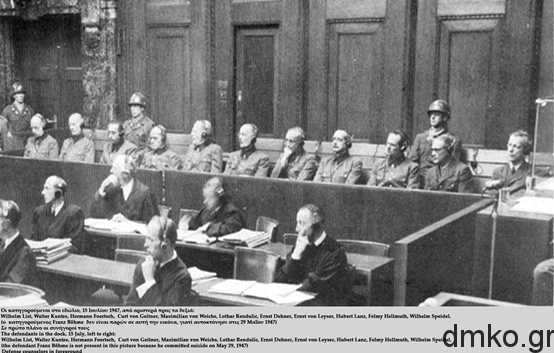 (Photo: The defendants in the dock, 15 July 1947, left to right. Defense counselors in foreground